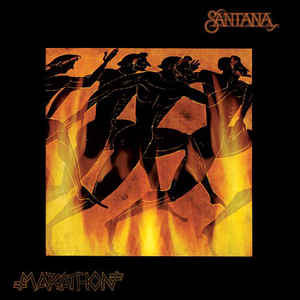 In many respects, the shifting trends of rock music in the late nineteen-seventies probably felt very accommodating to guitarist Carlos Santana. A master craftsman with his guitar, Santana had major hits with hard rock music as the seventies gave way to the seventies, but his style of playing often seemed misplaced surrounded by post-psychedelic thunder. He brought an intricacy to the guitar that was arguably more in line with the fusion of jazz and rock tipping more to the rock side that represented a natural progression from the floridness of prog rock. Marathon find Santana and the band that bears his name shifting into that mode, with clumsy results.

Part of the issue with Marathon is that it’s slip-slides around the prevailing sounds of the era without ever finding a proper groove. Aqua Marine” and “Runnin” wouldn’t sound out of place on a Jean-Luc Ponty album, at least until Santana pushes his playing into a bluesier style and the whole track takes on a level of confusion that makes it seem like individual instrument tracks were edited together by mistake. At the most regrettable, such as “Summer Lady,” it just sounds like a Boz Scaggs record with slightly tougher guitar work.

Oddly, the evolutionary step from sixties hard rock to seventies fusion put Santana in a place where they wind up anticipating the nadir of mid-eighties pop-rock, when all the new wave was seeped out of it to leave generic shells that could fill in the track lists of Brat Pack soundtracks. “You Know That I Love You” and “All I Ever Wanted” are practically the same song, just played at different tempos. And “Stay (Beside Me)” is so concentrated in its blandness that it sounds like it was recorded to serve as the theme music for an attempted Love Boat spinoff about the mundane lives of the seawater-spritzed, besotted couples after they went ashore. The veneer of inoffensive suitability is fortified by the lead vocals of Alex Ligertwood, on his first of many albums with Santana. Ligertwood comes across as the tepid tea version of Paul Carrack, who is barely lukewarm coffee himself.

When Split Enz turned in their fifth studio album, True Colours, their record label was disappointed. The already strong songwriting of the band’s brothers, Neil and Tim Finn, clearly took another step forward, but whatever verdict might have been delivered about the artistic merits of the album, one thing was certain to the executives: There was no hit on the record. The band suggested the earthy, groovy “Missing Person” was the album’s strongest cut and might make for a good first single. Instead, the label opted for “I Got You.” The song spent two months atop the chart in Australia, Split Enz’s home base at the time, and became the country’s biggest-selling single of the year.

When True Colours received its U.S. release, on A&M Records, the order of the tracks was rejiggered slightly to put “I Got You” right up top, leading off side one. What followed took listeners on a slightly wilder and wider aural journey than they probably expected. The album is locked into a distinctive pop sound, but also opts for a loose experimentalism. The wild art rock of “Double Happy” coexists with the orchestral refinement of “I Hope I Never,” and Split Enz seem equally comfortable no matter the extreme. They arguably lock in most firmly when deploying songs with a raggedy post-punk feel — the fervent “Shark Attack” or the yearning tingles of “Poor Boy” — maybe because the requisite brusqueness is an ideal match for strong pop songwriting.

In addition to the sterling material pressed into the grooves, there was a little something special skating across the upper plane of the physical record. In part to dissuade piracy, the record label used laser etching to put vivid designs across the surface of the vinyl. It was supposedly the first released album to feature the technique. 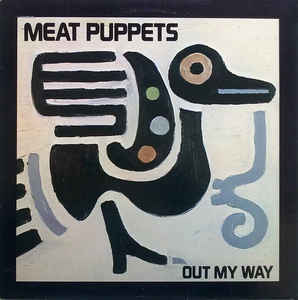 “When we work, we really work,” Curt Kirkwood, lead singer and guitarist of the Meat Puppets, told Spin magazine around the time the band’s EP Out My Way was released. “We tour for thirty days straight, and then when we go home we can afford to sit around for three months.”

By their own estimate, the Meat Puppets had mounted six tours over the course of four years when Out My Way came out, and the record naturally gave them cause to go out again. Standard bearers of Greg Ginn’s SST Records, the trio was known for raucous live sets and albums of freewheeling rock music. Like most college rock EPs of the era, Out My Way can reasonably be seen as a placeholder, provider a reminder to highly distractible student programmers about the continuing existence of a band they’d previously shown favor. Unlike some other short-form releases, Out My Way doesn’t come across as scraps and filler. Meat Puppets still raise a fine racket.

Opening with the burbling rock song “She’s Hot,” the EP clicks through a set of new offerings, all generally fine and sturdy. The spacey intricacies on “Other Kinds of Love” suggest the ranginess of the band, but the main impression of tracks stacked up like artisanal bricks, each special and appealing but most notable for dependability on display. When the steady gallop “Not Swimming Ground” turns into a lean, fierce jam at the end, finishing up well before it lapses into indulgence, it comes across as a mild variant, a wink of sonic expansiveness that the band can pull out of their collective back pocket any time they want. Only the closing track, an antic cover of “Good Golly Miss Molly,” is negligible.

The plan called for another quick return to the studio after touring in support of Out My Way. The schedule was derailed when Kirkwood broke his finger in an unfortunate encounter with the touring van’s closing door. The forced slowdown arguably contributed to Meat Puppets taking some of their most adventurous explorations to that point when the time to record again finally came around. 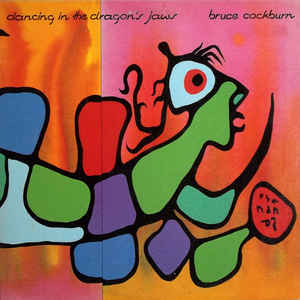 Singer-songwriter Bruce Cockburn released albums at a steady clip through the nineteen-seventies, building a strong fanbase in his native Canada and remaining fairly obscure in the nation to the direct south. In the U.S., Cockburn’s records sold modestly and the accompanying singles barely registered. The breakthrough finally arrived in 1979, with the release of Dancing in the Dragon’s Jaws.

In crafting the album’s songs, Cockburn was inspired by the writings of British novelist and theologian Charles Williams. According to Cockburn, Williams “was a terrible writer but had an astounding vision of how Divine/Human interaction works.” Cockburn consumed every bit of Williams’s writing he could find, and all those concepts were rattling around in his head as he pondered the crumbling state of the world and the existential threats, such as nuclear weaponry, that were under the control of highly questionable world leaders. These concerns converged into “Wondering Where the Lions Are,” a lovely folk-pop number that, played with grace and emotive elegance, became a U.S. Top 40 hit for Cockburn, his sole song to tally that achievement.

The remainder of the Dancing in the Dragon’s Jaws is in the same basic mode as its unlikely hit, sometimes remarkably so. “Hills of Morning” could almost be a demo version of “Wondering Where the Lions Are” with alternate lyrics. “Incandescent Blue” exhibits the offhand complexity akin to Joni Mitchell, and “Badlands Flashback” incorporates flamenco-light guitar plucking. If nothing else is as immediately arresting as the album’s established standout track, it all goes down impressively smooth and easy. Cockburn never had another sizable success on the singles chart in the U.S. One gem might be enough.