Technically, Neurotica is the first full-length studio effort by the outfit billed as Redd Kross. The band made their entrance with the 1982 LP Born Innocent, but they were going by Red Cross at the time, raising the ire of a certain humanitarian aid association. Rather than risk being barred from their local blood drives (and, probably more importantly, becoming the target of a devastating lawsuit), the band muddied up the spelling of their name just enough to evade the chafing shackles of U.S. trademark law.

Produced by Tommy Erdelyi, who helped launch the world’s best and most important punk band while drumming under the name Tommy Ramone, Neurotica is a surging blast of rock ‘n’ roll goodness. It draws upon just about every subgenre that had flared, dominated, and started to recede at that point. Glam, punk, garage, psychedelic, goth, metal, and even disco ping around the confines like popcorn kernels leaping off a hot surface. The results are messy, but also exuberant and freeing, demonstrating there’s a power to be found in joyful creative anarchy.

On “Frosted Flake,” Redd Kross sounds a little like the Runaways, and “Love is You” has something in common with the less overly confrontational music being made by the Frogs at about the same time. Mostly, though, the band forges a gleaming hot musical blade that is distinctively original and yet drawing on established approaches with enough expertise to give them a sort of everyband quality. They hammer out a wide stage that runs from the the metal-adjacent assertiveness of “What They Say” to the deeply mellowed out bliss of “Beautiful Bye Byes,” the brief album closer. And the sludgy guitars on “McKenzie,” about the One Day at a Time co-star McKenzie Phillips, forecast the grunge rock that would jolt and deaden the alternative music scene in the nineties.

Any hopes that Neurotica would become a crossover success were quickly dashed when Redd Kross’s label, Big Time Records, shut down shortly after the album’s release. Another three years would pass before their next full-length.

When it came time to record the 1984 album Word of Mouth, the Kinks were riding a rare cresting wave. The band’s previous studio album, State of Confusion, yielded the major hit “Come Dancing,” easily the Kinks’ most notable commercial success since the nineteen-sixties. There was obviously a touch of urgency to getting a new release in the record shops. Word of Mouth followed its predecessor by just about a year-and-a-half, a relatively common pace for college rock bands of the day, but not really expected of British Invasion stalwarts hitting their twenty year and twentieth album at the same time.

Accordingly, Word of Mouth sometimes feels a little dashed off.  “Do It Again” is a catchy pop song about the wearying futility of domesticate life, but that was a rug the band had trudged across many times and a certain threadbare quality was setting in. The similar poignant pessimism of “Good Day” is just plain mundane, and the revived, tweaked “Come Dancing” riff in “Too Hot” also suggests a halfheartedness at work. At the most dire point of the album, “Massive Reductions” suggests what it would have sounded like if Ray Davies had run the Doobie Brothers. The Kinks were thankfully too strong a band to turn in an album of nothing but tracks outside the wide bullseye. “Sold Me Out” has a splendid controlled clamor that niftily reminds how much the sixties garage rock movement owed to the Kinks, and the Dave Davies composition “Living on a Thin Line” is one of his most inspired contributions to the band’s weighty songbook.

There were other signs that the band was starting to splinter: film projects diverting Ray Davies’s attention, personnel changes brought about in part by frustration over a lack of touring, and the internal band feuds that never, ever dropped below a steady simmer. There was more music to come — some of notably good — but a lack of cohesion and creative energy was clearly setting in. 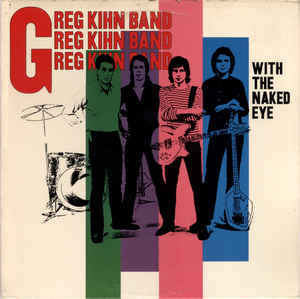 I’m not sure there are too many artists who can claim they butcher compositions by both Bruce Springsteen and Jonathan Richman on the same album. Thanks to With the Naked Eye, Greg Kihn sure can.

With the Naked Eye is the fourth studio album released by Kihn, and the first in which he wrapped his name into that of the band. Whatever the branding motivation behind the choice, it provided some logic for Kihn turning over one track to drummer Larry Lynch to sing. “Can’t Have the Highs (Without the Lows),” which Lynch also wrote, is the album’s best cut, but it’s almost by default. All the other competitors in the misbegotten race are the equivalent of race cars with flat tires, revving to no useful purpose.

As for the previously mentioned covers, on “Rendezvous” Kihn offers a sense of what it would be like if Springsteen morphed into Neil Diamond, and “Roadrunner” takes the signature song of Richman’s Modern Lovers and delivers it with all the credibility of Donny Osmond right after he declared he was a little bit rock ‘n’ roll. Criminal as those song are, they outpace the Kihn originals on the record, such as the ponderous rock star tragedy “Fallen Idol” and the indescribably bad “Moulin Rouge.” The almost-a-title-cut “In the Naked Eye” is representative of Kihn’s coupling of muddled music with horrible lyrics (“I must be on the edge of the razor blade/ In the situation that I have made/ What can I do, it’s up to you/ ‘Cause everything I did, I did for you”).

Quality be damned, Kihn made albums at a breakneck pace. By the law of averages, he was likely to stir up a hit somewhere in there. It didn’t happen with anything off of With the Naked Eye, but the breakthrough was coming fairly soon.

David Roback spent the first half of the nineteen-eighties in the Paisley Underground band Rain Parade and propelled himself into the nineties as half of the creative force behind Mazzy Star (hitting pay dirt with one of those songs that will have a prime place in the world as long as there are sad teens). In between, he teamed with bassist Kendra Smith and drummer Keith Mitchell to form Opal. If there were any doubt the group would continue the dreamy, psychedelic-tinged music of the scene Roback — and Smith, as a member of the Dream Syndicate — previously toiled, the band name was taken from the title of a Syd Barrett song. And Opal adhered to the model suggested by their official inspiration.

Happy Nightmare Baby, Opal’s full-length debut, is a phantasmagoric miasma of vivid, gloomy sounds, with Smith’s moody, evocative vocals casting a spell of enticement that occasional cuts against the jaggedness of the music. “Magick Power” is a cut to accompany a midnight twirl in a decaying garden, and the title cut brings a post-punk clarity to chunky, jammy music. There are guitars that bend and buckle on “A Relevation” and marathon album closer “Soul Giver” takes that to a further extreme, anticipating — of influencing — the swirly, whirly likes of the Brian Jonestown Massacre and Spiritualized. On “She’s a Diamond,” the approach is softened and slowed, giving the impression of T.Rex as pushing through the end of a long set as elephant tranquilizers kick in.

Shortly after the release of Happy Nightmare Baby, Smith departed the endeavor, briefly pursuing a solo career before retiring from music altogether. It was that choice that led Roback to seek out a new partner, quickly alighting on Hope Sandoval, a singer he’d already started working with, intended to produce a solo record for her. Instead, she joined the band, though they’d decide before long that continuing under the Opal name wasn’t ideal. Instead, they adopted the moniker Mazzy Star and moved forward.