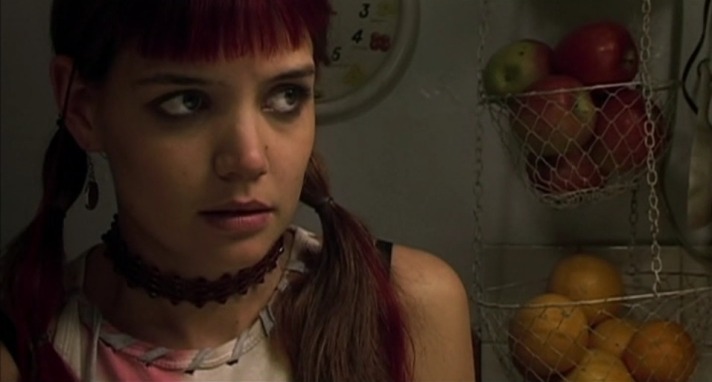 There’s a passage of young adulthood that I find is rarely captured with accuracy and empathy in cinema. There’s an endless supply of teenagers navigating the social landmines of high school, and then eager twenty-somethings taking the professional world by storm, mixed with a few fully surmountable problems, probably around romance. For most, though, there’s a whole other purgatorial stretch, characterized by an uncertain exploration of the more mundane aspects of adulthood. It is the time of figuring out the tasks that others take for granted, and few things can knock aside the wall of youthful confidence as forcefully.

There are many pleasures to Pieces of April, the feature directorial debut of Peter Hedges, but chief among them is the way it perfectly captures the experience of life adrift at the cusp of adulthood. Some of the accuracy is built right into the screenplay, but most of it comes directly from the burrowing insight Katie Holmes bring to the lead role of April Burns.

Living in a dinky New York City apartment with her boyfriend (Derek Luke), April is poised to play host to her family for Thanksgiving. The squabbling carload of them are traveling from upstate as April scraps and scrapes her way through the colossal chore of preparing an appropriate holiday feast. In the context of the narrative, this could easily amount to little more than the cringe comedy of clumsy culinary striving, especially as April endures untimely misfortune, such as a malfunctioning over. That would be the paper thin approach. Instead, Holmes stealthily conveys the importance of the stakes, constantly exhibiting the shimmer of anxiety that accompanies the desire to get things right. She’s impatient and frazzled at times, but a determination always breaks through. And when certain neighbors comes to April’s rescue throughout the day, her gratitude has a piercing truth because of the way Holmes establishes the firmer inner hope for success.

Further mirroring the way the Thanksgiving holiday works away from fictional film narratives, April is also feeling trepidatious about the convergence of family. The more common worries are compounded by the looming arrival of a domineering mother (Patricia Clarkson, marvelous, of course) whose storm cloud attitude is further darkened by an ongoing struggle with breast cancer. Holmes signals the mixed emotions April feels: fear, resentment, guilt, wounded affection, and presses them into a moving earnestness in wanting to impress, both as a means of proving herself and also to genuinely give her mother the needed boost of a positive holiday experience.

Like many people her age, April does her level best to keep roiling emotions like these contained. It’s part of putting on the disguise of adulthood to hide the fact that maturity and responsibility don’t yet come naturally. Holmes is precise in playing this scalding simmer, adding to the poignancy of those moments when April’s day collapses into disappointment. In the delicate rendered of Holmes, April’s feelings are so present that her wounds transfer, too.