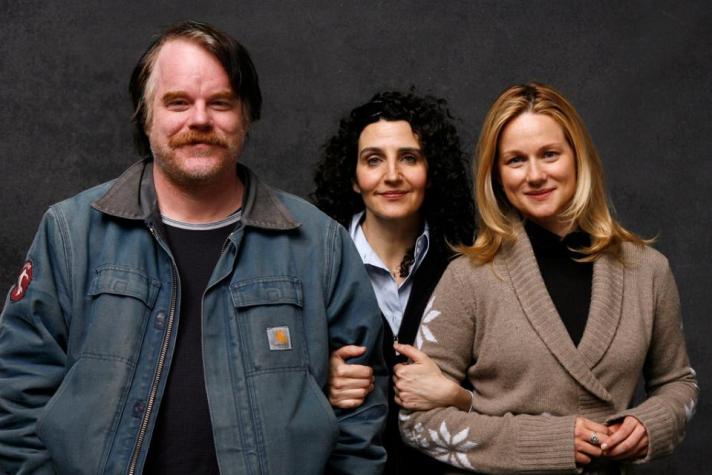 I’m always pleased when I discover something in one of these old reviews that carbon dates it to the era in which is was written. I think the reference to Blockbuster in the lengthy opening paragraph accomplishes that feat nicely. For today, I though about dredging up my old review of Sam Raimi’s Spider-Man 3, the first cinematic appearance of the character Venom, but it turns out I didn’t type word one about the character or the performance by Topher Grace (who, amusingly, is so different from new Venom portrayer Tom Hardy that the two could be photo negatives of one another). So instead, I’ll commemorate Netflix once again providing a distribution outlet for a tremendous filmmaker whose material doesn’t fit comfortably into the current grasping-at-tentpoles strategy of most studios. You know, like I did three weeks ago. It has been too long between films for Tamara Jenkins. I hope that was her choice. I fear it wasn’t.

Categorizing films, placing them into broad, encompassing genres, is a tricky — arguably futile — endeavor. The new film The Savages has been casually referred to as a comedy, a dark comedy to be sure, but a comedy nonetheless. The official movie poster is sure to including laudatory critics’ quotes the words “funny” and “humor” and features art by comic artist Chris Ware, which is sure to signal something safer to most moviegoers — for whom the phrase The Acme Novelty Library is about as meaningful as any four randomly selected poetry magnets — than it actually should. The Golden Globes were even more decisive, slotting Savages into the “Comedy/Musical” categories in their film awards (and, as an aside that will tip my hand as to what I thought of The Savages, you may not a stronger example of the ineptitude of the Hollywood Foreign Press as arbiters of excellence than their omission of Laura Linney from the relevant Best Actress category in favor of, well, at least four of the five honored performers, but especially the I’m-just-happy-to-be-here enthusiasm of Hairspray‘s Nikki Blonsky). It’s a strange situation for this smart, fairly grim film. I laughed appreciatively many times during The Savages, but I can say the same about No Country for Old Men and I don’t see anyone laying groundwork for it to be filed somewhere between Meet the Fockers and Old School in the local Blockbuster’s comedy section a few months from now. I imagine more than a few people will go to The Savages expecting a film much lighter and thoroughly comic than it really is and wind up blindsided. Hopefully, that harsh surprise won’t distract those people from noticing that’s it’s also terrific.

Philip Seymour Hoffman and Laura Linney play siblings who are called upon to retrieve their elderly father from Arizona, in part because he’s suffering from dementia that has made it impossible for him to care for himself. It’s a simple beginning for a film that’s anything but simple. For one thing, this is neither a warm-hearted story of family coming together or a pummeling exercise in opening old wounds. It’s far more complicated. Hoffman and Linney’s characters are basically estranged from their father, but don’t carry the resulting personal emotions from that distance like heavy, burdensome overcoats. It is part of who they are, it has shaped them, but it doesn’t inform every scene in highly dramatic ways. They go about the business of getting him into a nursing home and interact with him during his descent in ways that are revealing largely because their gestures are more about giving themselves comfort than building additional happiness into his waning days. It is a hard truth that, like everything else in the film, is largely presented as just another facet of life.

The whole film can be described as a big slab of life. Hoffman’s character is a college professor specializing in Bertolt Brecht, and he helpfully writes a lesson on a blackboard about “plot” versus “narrative.” He never gets around to explaining that difference to questioning student, but The Savages serves nicely as its own lesson plan for the classroom of the movie audience. Don’t look for the scheme of the storytelling to following a familiar framework, necessarily. Instead, watch these characters live out a piece of their time, their frailties heightened by their situations, their patience tested and torn. Hoffman’s professor defends himself with his pragmatism, alert to criticism but largely too weary to dispense his own judgment. Linney’s struggling playwright is a mountain of vulnerabilities with occasionally reserves of potential fortitude exposed. These pro actors dig into the roles with disciplined gusto.

Writer-director Tamara Jenkins creates with her own disciplined gusto. A long-gestating follow-up to her feature debut, the sloppy but somewhat endearing The Slums of Beverly Hills, the film is focused and unsparing, a gut punch of lingering dysfunction. As opposed to another recent film that could be described that way, The Savages never pushes the problems or personality flaws to such extremes that it strains credibility. There’s an understated truth to the storytelling that makes its moments of heartbreak and tentative redemption all the more potent.