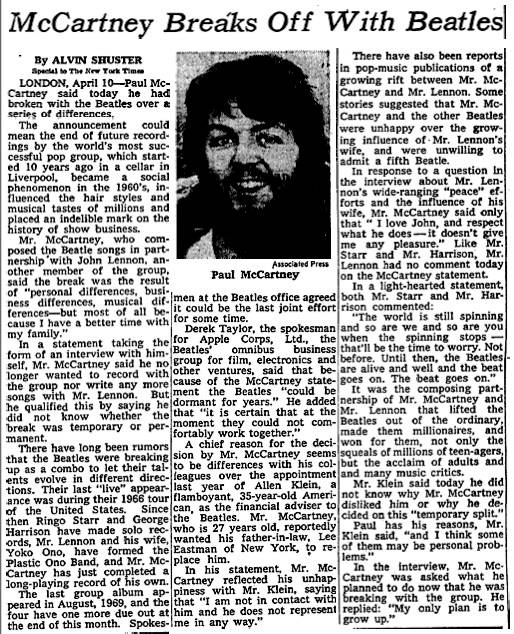 This was written for my former online home, as part of a recurring feature I dubbed “Flashback Friday.” It amazes me that we’ve reached a point nearly fifty years after the break-up of the Beatles and the scruffy fella see in the above picture is still releasing new records and launching another major concert tour that’s selling tickets like mad. And Ringo’s still at it, too, mounting regular caravans of middling legacy rockers. “My only plan is to grow up,” McCartney says at the end of the New York Times articles I nicked to accompany this post. He’s pulled that off with greater grace and endurance than anyone would have predicted.

When I was a little kid — meaning kindergarten age — I could confidently identify my favorite band. My youthful record collection was predictably well-stocked with offerings targeted at my barely verbal demographic, but since I also had a stepfather who embraced music with a herbal bliss, my little plastic record player had some more adult offerings stacked up next to it. Sometimes these were albums that my stepfather discovered he’d inadvertently purchased more than once. At least one well-worn 45 was one of the most revered singles in rock history, though I recognized it less as the trippy apex of Brian Wilson’s damaged genius than as a catchy tune that the TV sometimes used to make me crave orange pop. Unmistakably, though, there was one band I loved the most, maybe the one band I could identify by name whenever I heard them. The Beatles.

Maybe because of this early affection, I’ve long had a keen awareness that the four members were never together, never considered themselves a band, during my lifetime, but just barely. I was born in May of 1970, and the band’s dissolution, to the degree that it can be attached to a single date, happened the previous month when Paul McCartney made it official, announcing his departure from the quartet in the press material accompanying his first solo album. The final Beatles album was released three weeks before I was.

It’s astounding to think of what they accomplished in such a short period of time. The band’s first single came out in October of 1962, their first studio album in March of 1963. Their famed appearance on the Ed Sullivan Show was in February of 1964, and Richard Lester’s A Hard Day’s Night was in movie theaters that summer. By the following year, they were working on Rubber Soul, the first of a string of albums that, like them or not, redefined pop music. Every time a new record was pressed, the sonic fabric changed. These epochal records, it should be noted, were released on a yearly basis: Revolver in ’66, Sgt. Pepper’s Lonely Hearts Club Band in ’67, The Beatles in ’68, and Abbey Road in ’69. There are maybe one or two artists working today who are both significant and prolific, but no one that has matched a run like that.

The accelerated rate of their career means that you can practically hear the band breaking up on record. In particular, the fragmentation is the very character of “The White Album,” which I think is the band’s pinnacle. It sounds like four solo albums smashed together in disgruntled defiance. And each one of those solo albums is already wildly varied, as the individual members are in a heated, implicit battle to prove the superiority of his own personal genius. The diversity gives it a cohesion, the competition gives it a narrative. It is a brilliant mosaic, practically quivering as it threatens to shatter apart. That the band made two more proper studio albums after this is incredible.

In the ten years between the break-up and John Lennon’s tragic death, speculation about a reunion was constant, and constantly thwarted. Fans clung to the idea that they may have recorded together under a pseudonym, and bought pricey Broadway tickets for an incredible simulation. Lorne Michaels made light of it all in what may be his finest moment in a Saturday Night Livebroadcast. They never did truly reunite. I like to think that they never would have. There’s something very satisfying about the clear ending of their career, a point when they decided their legacy needed no further embellishment. The band said so much. It’s fitting that they also decided at some point that they’d said enough.