These posts celebrate the movie trailers, movie posters, commercials, print ads, and other promotional material that stand as their own works of art. 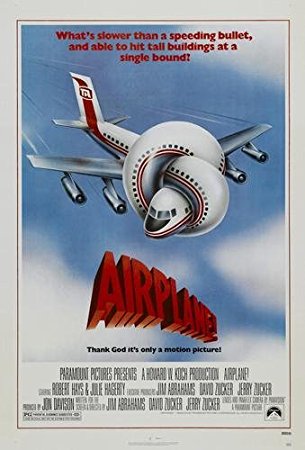 Months ago, I used this space to expound upon the glories of the most famed movie poster for the 1981 Joe Dante werewolf film The Howling. In he comments, I was asked to identify the original artist behind the striking image I celebrated. To my embarrassment, I couldn’t — and still can’t — put a name to the poster. Although I’m someone who truly believes in giving credit where credit is due, I couldn’t pin down the person who rendered the image that stuck with me.

I offer that penitent observation as means to celebrate artist Robert Grossman for creating one of the most distinctive movie poster illustrations of the nineteen-eighties. Understandably, Paramount didn’t quite know how to market Airplane!, the brilliantly absurdist comedy crafted by Jim Abrahams, David Zucker, and Jerry Zucker. The ads touting the preview showings of the film included the completely off-base tag line “The pilot said N.Y., the navigator said L.A., the stewardess said she’d go both ways.”

The amenable flight attendant was once part of the poster, too. She disappeared quickly, though. The mainstay was the distinctive sight of a jumbo jet hurtling forward despite the fact it’s fuselage was somehow tied into a knot. That was Grossman’s doing. The artists, arguably most famed for the distinctive magazine covers he created, was an ingenious visual satirist, and with a single physics-defying drawing he captured the essence of the movie’s virtually unprecedented comedy.

Other entries in this series can be found by clicking on the “Art of the Sell” tag.