My Misspent Youth: Howard the Duck by Steve Gerber and Gene Colan

I read a lot of comic books as a kid. This series of posts is about the comics I read, and, occasionally, the comics that I should have read.

As I remember it, I figured out right away that Howard the Duck wasn’t for kids. The first issue hit spinner racks when I was a mere five years old. At first glance, it bore a resemblance to the material I was excitedly reading at the time. Still, I somehow knew it was a comic for adults. I suspect that was attributable to the fact that adults were reading and talking about it, making it something of a mini-sensation in the middle of that strange decade. And the storyline that I most vividly remember swirling around the pop culture ether involved the surly, stranded waterfowl’s entry into the 1976 presidential election.

Looking back at it now, it’s remarkable how casually writer Steve Gerber slips into that particular plot, almost as if it occurred to him midway through the creative process and he decided to run with it. (Gene Colan handles art duties on these issues, with fantastic results.) The cliffhanger from the previous issue, involving a giant gingerbread man brought to murderous life, is dispatched within the first few pages, bringing the reader to what was billed in the prior issue as a “2nd BIG LAFF RIOT!” Howard and his comely companion, Beverly Switzler, hitchhiking to New York City, are picked up by country music star Dreyfuss Gultch, who’s on his way to sing “The Star Spangled Banner” at the convention of the All-Night Party, a boisterous alternative to the Democrats and Republicans. Short on cash, the vagabond duo parlay their tenuous connection with Gultch into a comped suite at the Plaza and a couple of short-term jobs at the convention, Beverly as a hospitality girl and Howard with the security detail. 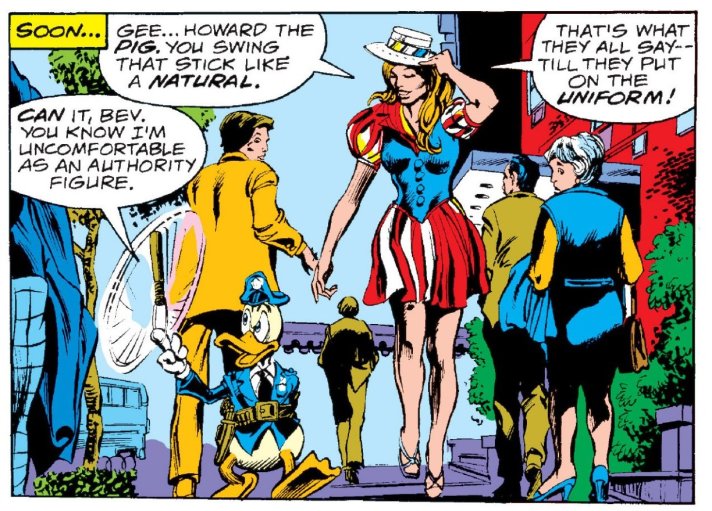 The security is hardly rigorous, with Howard’s supervisor putting his primary attention towards inspecting some of the other hospitality girls. But when Howard gets wind of an assassination attempt on one of the candidates competing for the nomination, he flaps into action, safely disposing of a bomb rigged to explode on the delegate floor. This act of Howard immediately elevates him to become the overwhelming people’s choice at the contested convention.

Initially, Howard is swept along by the madness, lacking in control as the party bigwigs go to work finessing his image and stoking the passions of the electorate, excitedly reporting that among the major candidates he has generated the highest likelihood of facing his own assassination attempt. That means he’s making an impact, they insist.

The campaign strategists try to load Howard up with generic stump speech malarkey (“I’m tired of hearing people run down this country! Sure, we’ve got problems — pollution, inflation, recession, crime, pervasive moral decay — just to name a few. But what nation doesn’t have its troubles?”) Howard ditches them in favor of an ad agency picked at random from the yellow pages: Mad Genius Associates. What follows is a flurry of abrasive truth-telling, with Howard collecting a steam shovel’s worth of non-disposable packaging littered around the city and dumping it at the doorway of the company that manufactured it and balancing the military budget by stripping the housing stipend from generals who demand expensive new weaponry.

Marvel Comics was notably freewheeling in the nineteen-seventies, but this scabrous satire still feels daringly odd for a title for a mainstream comic book publisher at the time. Sure, Stan Lee was moving Valhalla and Midgard to change the perception of comic books as strictly a kids’ medium, but there’s little question that the average age of those perusing the weekly new releases was low enough that the barbed comedy feels risky. It’s anarchic in a way that might tickle younger readers, but Gerber’s wry commentary is fairly sophisticated, right up to the specific turn of fortune that demolishes Howard’s insurgent campaign: the emergence of a sex scandal.

Of course, this is all nothing more than silly satire. There’s no way a brash, indecorous grandstander with a freakish appearance could become a serious contender for the President of the United States of America.