I read a lot of comic books as a kid. This series of posts is about the comics I read, and, occasionally, the comics that I should have read.

As I’ve acknowledged previously, my youthful commitment to Marvel Comics included a zestful excitement about researching the publisher’s comics from before I became a reader, which happened nearly twenty years into their history, giving me a lot to catch up on. I wanted to know the full scope of the continuity of the fictional tales, but I was also fascinated by the bevy of behind the scenes tales. Unlike their distinguished competition, which preferred elevating the characters to the near anonymity of the creators, Marvel cultivated a sense of boisterous community driving the creative process, bestowing upon those who toiled in the company bullpen a level of heroism and celebrity meant to rival that of the costumed do-gooders. I loved the stories about the actual making of the comics. As it turned out, though, I was largely getting the most sterling tales filtered to me. It wasn’t until many, many years later that I became exposed to the messier processes, which were, of course, even more fun.

It was well past my early years as a reader, for example, when I finally heard the fable of Iron Man #39. Published in 1971, it contained a fairly standard tale for Tony Stark and his armored alter ego, back in the days when Iron Man was a B-List hero, at best. Gerry Conway’s art didn’t make it distinctive. It was Herb Trimpe’s art that achieved that. The legend maintained that Trimpe drew the entire book in a roughly twenty-four-hour period, a ludicrously short amount of time for a full comic book story. When asked about it later, Trimpe acknowledged it was a rush job and figured he spent a couple days on it. The precise amount of time isn’t really the point. What resulted is on the page, and it looks spectacularly amateurish, miles from the expected quality level of a book from a major comics publisher.

Just look at that array of hastily sketched in faces and globby Iron Man armor, the holes in the faceplate reduced to jabbed on lines. Then there’s the villain of the issue, the unfortunate White Dragon.

Usually one has to seek out the artwork of a toddler reeling from cold medicine to find facial hair so inexpertly rendered. It’s like someone spoke a real whopper into a polygraph machine to be sure it was operational.

Trimpe wasn’t the regular artist on Iron Man. Examining the credits of issues surrounding this one, it appears George Tuska had recently taken over that role from Don Heck. I seem to recall a version of the story that maintained the editors found out very close to the deadline that Tuska wasn’t going to turn in his art for the month and Trimpe was handy, hanging out in the Marvel offices. Rather than resort to the slapdash reprint that was the usual default when a title fell to the dreaded deadline doom, the powers that be asked Trimpe for a rapid rescue. No matter how rough the pages Trimpe delivered, they were evidently deemed preferable to plucking an adventure from an old issue of Tales of Suspense. If Iron Man occasionally resembled an ill-proportioned balloon animal, so be it.

At times, it almost seems as if the story has been cooked up as an escalating dare to Trimpe. “So you think you can draw a whole issue in a day or two? What if, say, all the Avengers show up?” 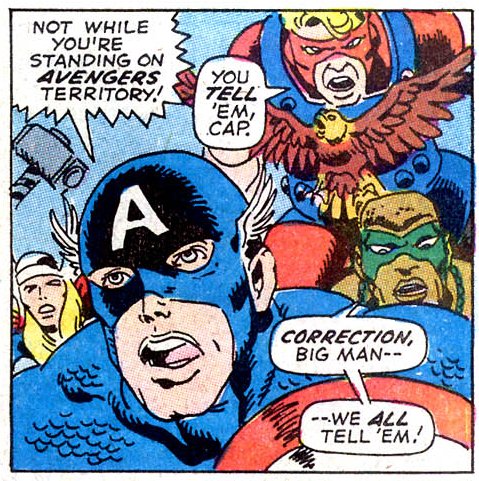 If I’d have encountered this comic book when I was a kid, I surely would have viewed it with pure disdain, my snobbery over reading only mature, erudite, exemplary material (or so I thought it to be) at a peak when I was scuffling through my high school years. An issue like this, which was clearly a mess, would have stirred up the shame in me, the embarrassment over reading trashy kids’ stuff. Now I love it more than any number of those supposed pop art masterworks I was prepared to tediously expound upon back then. I don’t think Iron Man #39 is good, but I am overjoyed with the specific ways in which it is bad.