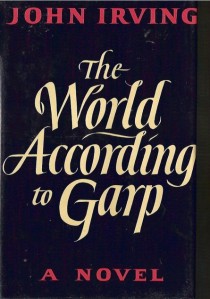 When I was a kid, few things drew me to a book more assuredly than the existence of a corresponding movie. This could go in either direction, by the way. The nineteen-seventies and eighties were a sort of golden age for novelizations of movies, and I was happy to devour them. Similarly, if a movie was based on a book, inexpensive paperback copies were usually readily available, stocked generously into racks at the supermarket. In retrospect, I think I used it as a rough guidepost as to which books were worthy of my scattered attention. If the story existed in more than one medium, it must be especially good, right? I’m fairly certain it was also a means to preserve the experience of an especially good film. In the days before DVD purchases and digital downloads, illicit or otherwise, the easiest way to relive a movie was page by page.

Though John Irving’s The World According to Garp was first published in 1978, becoming a huge bestseller, I didn’t flip open its cover until after seeing the movie version, which surely didn’t take place until a year after its 1982 release, when it finally made its way to cable. (To be clear, I’m old, but I’m not that old. It would have been entirely inappropriate for me to read The World According to Garp much before the time I did.) The beneficiary of a relatively faithful adaptation, I knew most of the major plot turns before I ever started in on the first chapter. It didn’t matter. I was already committed to the story, yes, but there was also something about the sensibility that locked me in further. This was in part because the novel represented one of my first “adult” books, stocked with enough frank sexuality and complicated themes — as one might expect from a novel written by a proud, bullish man toward the tail end of the seventies, it has a fascinating and conflicted relationship with feminism — to set it apart from even the serious literature we were assigned in school as a means to edge us toward a more mature outlook in our reading. But it was also that it had a tone that was, at the time, unfamiliar to me, grounded in classic form but infused with mild satire, wry cynicism, and a bleak assessment of the pathways to personal enlightenment that are sought but rarely understood. Now I recognize it as characteristic of a whole generation of American writers: Roth, Updike, Cheever, the other WASPy usual suspects. Then, it was revelatory.

For a while, I chased Irving’s books, looking to have my head spun around in the same way. There were others I enjoyed, but the effect was never quite the same, maybe because I did eventually realize he was part of a literary legion rather than a full-fledged trailblazer. Maybe I started to see the technique all too well, catching the little tricks he used to make the improbable mundane and vice versa. Regardless, the author became someone who relegated to my youth, looked back on fondly but without much regret for leaving him behind. Every once in a while, a new book of his will pique my interest, but I can’t quite bring myself to read Irving again. In the end, I simply like keeping him in an idealized reading past.