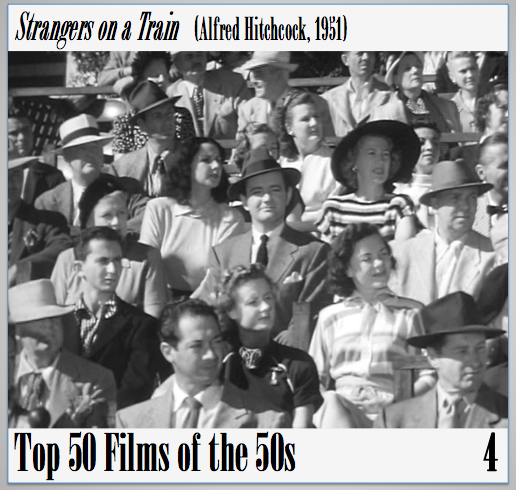 #4 — Strangers on a Train (Alfred Hitchcock, 1951)
The films of Alfred Hitchcock are ideally suited for clip reels, which can skew perception of them a bit. Moreso than Billy Wilder, John Ford, or any of his other rough contemporaries who presided over at least as many classic films, Hitchcock had an eye and a knack for that one master shot — often achieved through some revolutionary manipulation of the visuals — ideally suited to pulled out of context to stand on its own. By the time distinctive shots have been shown ad nauseum in aggressively stitched together celebrations of the best the history of cinema has to offer, it can start to feel like whichever Hitchcock films were the flashiest should be automatically held up as the peak of his craft. I’m probably susceptible to this trend, forgiving, say, the strained, borderline laughable closing scene of Psycho that explains Norman’s actions through a grandiose psychiatric diagnosis in part because the spectacular shower scene is embedded in my brain. And yet, when forced to name the Hitchcock film that I consider his pinnacle (acknowledging the only person forcing me is me, as these decade lists are a self-delivered assignment), I always defer to one of his leaner features: Strangers on Train.

Starting with the novel of the same name by Patricia Highsmith, maybe the most formidable writer Hitchcock ever looked to for source material, the filmmaker and his collaborators (including, briefly, Raymond Chandler as a screenwriter) burrowed into the story’s edgy complexities, creating a intricate exploration of the way shadows can infiltrate the most comfortable of lives. It begins with a chance encounter, tennis star Guy Haines (Farley Granger) and wealthy layabout Bruno Anthony (Robert Walker) meet while riding the rails to their respective homes. Some idle conversation about the interpersonal challenges in their lives inspires Bruno to share his idea about committing the perfect murder, a trading of desired victims among individuals with no known connection to one another, eliminating any evident motive. Bruno takes Guy’s polite acquiescence to the twisted theory as an official go ahead to villainously seek out the person causing the tennis player grief, his cheating wife, Miriam (Laura Elliott). The film settles into one of Hitchcock’s favorite grooves, that of an ordinary fellow desperately outmatched by the troubling circumstances he’s stumbled into.

There are a couple trick shot moments — notably, the grimmest sequence viewed largely through the reflection in a pair of eyeglasses — but Strangers on a Train mostly finds Hitchcock deploying a narrative with clockwork certainty. The Master of Suspense is preoccupied with that very quality, bringing the story along with a keen attention to every little detail and every tiny turn that will enhance the noose-tightening tension of the film. This is also one of the director’s craftier outings in terms of the performances. He plays to Granger’s limitations as an actor, heightening the stolidness of Guy. On the other side of the criss-cross, Walker develops an intense level of menace in his character more through insidious camaraderie and ease. He’s no maniac. He’s simply someone whose established comfort in getting what he wants has infiltrated the darker parts of his soul, like murky tide rushing up the beach. Hitchcock is uniquely attuned to the balance that’s needed in the film, achieving a sense of mounting trouble while also keeping it firmly grounded in the interplay between individuals, tangled somewhat in misunderstanding, but mostly engaged in a mutual triggering of base desires, some of them viciously brutal. Few other films, by Hitchcock or anyone else, get at the lurking malevolence of the human psyche.