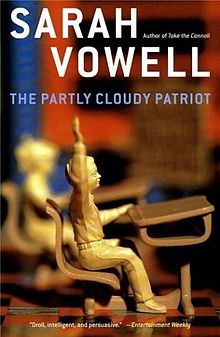 “My ideal picture of citizenship will always be an argument, not a sing-along.”

“Voice” is a word that’s used commonly to describe writers, at least good ones. It’s usually meant to describe something that’s found strictly on the page: point of view, personal facility with language, consistency of self expressed through their words. For a few, though, “voice” has an added meaning. As with her fellow This American Life alumnus, it’s difficult to read Sarah Vowell’s words without hearing her actual voice. As in the one that comes out of her mouth when she speaks.

The distinctiveness of that voice is surely a part of it, but I think it’s more attributable to the fact that her verbal tones are a perfect match for her writing: piquant, withering, unique, and simultaneously girlish and wise. She always writes from a place of passion and sometimes clearly stirred by anger. And yet she never comes across as reactionary or vision. She is the girl in the back room who is quiet until the moment is right, until she has something clear and certain to say. And every bit of her statement (or question, or demand) is proof that she’s been paying attention–sharp attention–all along. She establishes herself as a voice worth listening to. Fittingly, she is the wheel that squeaks.

She is predominantly a comic writer, with a preference for history and politics. Though her own beliefs are usually clear, she refrains from diatribes. In a nation that has decided once and for all that being interested in the body politic necessitates picking sides and sticking to corresponding beliefs with unwavering zeal, Vowell suggests that a different approach may be possible. My favorite thing she’s written, by far, is the title essay in the collection The Partly Cloudy Patriot. I hold dearly to the passage in the story when she talks about attending the inauguration of George W. Bush after he lost the 2000 election but still won the presidency (note: getting fewer voters is supposed to equal losing in such contests.) She is there, as she put it, as a dissenter. Yet when the time came to sing the national anthem, she joined in, as robustly as she would in a moment of resounding pride in country. Many around her chose not to, but Vowell believed that feeling dismay about appointed political leadership didn’t negate her connectedness to the nation, her very citizenship.

I think Vowell understands the backsliding dangers of the past several years, the erosion of our national character into a panicky, enraged version of its former self. More valuably, I think she conveys it beautifully well on those occasions when she levels her pen against it. In struggling openly with her own misgivings about the state of the nation, she finds her way to eloquent assessments that tap into emotions I felt unable to verbalize, to put a name to. Selfishly, I wish she wrote a little more. I wish she had a compulsion to weigh in on the matters of the day and a platform for the task. Instead, I need to occasionally dip back into her past work and find something salient for the moment when I need it. That’s okay, though. The words remain. The voice still resonates.

“In fact, it has been said that God is currently angry with America. But according to God’s publicist, the Supreme Being would like to clarify that He’s not angry, but that ‘He would like His name taken off the credits.'”

5 thoughts on “My Writers: Sarah Vowell”