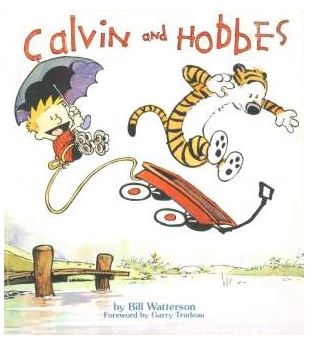 I operate under the belief that I saw the very first Calvin and Hobbes comic strip when it appeared in the newspaper. I have a vague memory of being in one of my high school classrooms, a social studies course where the teacher had the daily newspapers and a bevy of weekly current affairs magazines delivered and on display, actively encouraging us to peruse them while others were completing assignments. (He also regularly made us watch C-SPAN, which is a sort of torture for adrenaline-fueled, hormone-addled teenagers, as well as forced us to sit through entire Mark Russell comedy specials, which is a sort of torture for anyone with ears.) The theory was that we’d become acquainted with the news of the day, but I was just as likely to intensely study the funny pages. One day, one on corner of the page, here was a strange, new strip, one featuring a little boy in a pith helmet announcing to his distracted father that he was certain his bait of a tuna fish sandwich had helped him ensnare a tiger. Improbably, the last panel proved the boy’s prediction accurate. Hanging upside down, responding to a conversation that, according to the geography of the narrative, he shouldn’t have been able to hear, was a striped feline beast chewing contently on the fishy offering. One day later lucky readers would learn that the boy was named Calvin, and the day after that they’d discover the tiger answered to Hobbes, in the same strip it was first revealed that everyone else saw the ferocious creature as a cute stuffed toy.

Surely I can’t be right about being there from the beginning. According to Bill Watterson, the strip’s creator and sole author, Calvin and Hobbes launched in about thirty-five newspapers. Could the modest and notably staid Wisconsin State Journal really have been one of those? There’s certainly a strong chance I was introduced to it early in its run, as the strip was a fast success, syndicated to over 250 newspapers within the first year or so of its existence. I will proudly (and hipsterishly, I guess) assert that I definitely loved it before it was decisively anointed as the great strip of its era, one of the great strips of any era. As soon as the first collection was released, in the spring of 1987, I was sure to order it from the comic book retailer that I was signed on with as a monthly subscription service customer, unwilling to trust my ability to get it on the vagaries of how local booksellers stocked their respective humor sessions. This was something I needed to own, read and reread. And I kept getting the books, right up through the twenty-two pound compendium that stands as one of the finest Christmas gifts I ever received.

Inspired by Charles M. Schulz’s Peanuts, Walt Kelly’s Pogo, and George Herriman’s Krazy Kat (the last seen most clearly when Watterson used his eventual clout to bend the Sunday strip to his creative will), Watterson was first and foremost an inspired cartoonist in his work on Calvin and Hobbes. But he was also a concise, profound writer. There is the difficult feat of creating characters that are memorable and distinct, both alive with possibility and easy enough to grasp to tell a story in a small handful of panels. The cast is of course led by the passionate, impulsive, cynical Calvin and the sage, playful Hobbes, but also includes Calvin’s weary, patient parents, his embattled school teacher, and the girl down the street, the kind, often understandably baffled Susie Derkins. But the skillful writing was in greatest evidence in Watterson’s observations of the folly of modern life and particularly adulthood, all couched in the safety of humor. The smallness of humanity, the loneliness inherent in a tough world, the welcoming simplicity of nature, even the problematic helpfulness of procrastination all were fodder for Watterson’s comedic ruminations. He said all along that he had modest goals for the strip, satisfied if he made his wife laugh with the joke of the day. That humility of aspiration towards little more than quiet contentment comes through in the strip. Sometimes all it takes to be satisfied is a enjoyable word, spoken aloud.

It’s strange to think that Calvin and Hobbes only lasted a little more than ten years, and even that stretch wasn’t quite continuous, with Watterson willing to follow the lead of Doonesbury creator Garry Trudeau and take the occasional sabbatical to recharge his creative batteries. Even now, almost twenty years after Watterson’s final strip, the resonance of the creation is remarkable, outpacing the influence and interest in any strip in current publication or even the peer strips that were celebrated with equal fervor at the time, such as The Far Side and Bloom County. Watterson has been the subject of a feature documentary, and his creation lives on in any number of tributes, some inspirational, some geeky, many of them clever and loving, and more than a few of them rendered in snow. I remain devoted to Watterson and Calvin and Hobbes. Happily, I am not alone.

6 thoughts on “My Writers: Bill Watterson”