I nearly forgot that I have a Halloween tradition. For the third year in a row, these are things that I find (or at least have found) scary… 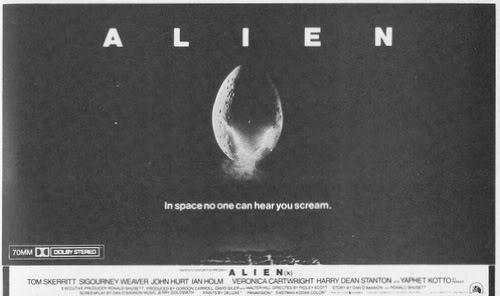 Ridley Scott’s Alien was released in theaters six days before me ninth birthday. Back then, I was very prone to scouring the movie ads of the daily paper (“Back then,” I typed, as if that’s not exactly what I did an hour ago when the latest edition of my community’s alternative weekly hit the stand that resides down the hallway from my desk). I was looking for kid-friendly fare that I could wave in front of an adult in an attempt (often in vain) to get them to take me to the movies. In the process, I could occasionally discover advertisements that left em deeply unsettled, such as the eerie cracked space egg coupled with the terrifying promotional line “In space, no one can hear you scream.” That the outer space oval called back (probably inadvertently) to a Superman cover that I’ve already admitted gave me the heebie-jeebies certainly helped make the ad that much more effective, at least for me. For years and years afterward, the closest I got to watching Alien was reading the Cracked magazine spoof.

I brought up this story in a entry in the “My Writers” series on Stephen King that went up a couple months ago. I was reading Stephen King’s It in bed at my grandfather’s house around the time I was in high school. The sequence in which one of the characters encounters a which who winds up morphing into her abusive father (and then the scary clown who’s the main villain of the story) completely unnerved me, largely due, I think, to King’s intense descriptions of the all the shifting, surreal details of the scene. Completely unnerved, I decided that was it for the night, turned off the lights and tried to go to sleep. Shortly after I’d finally expunged the images of the scene from my brain, the plywood board that covered up the storage place under the eaves mysteriously came loose from where it was nailed into place and fell against the headboard, right next to my resting noggin. My recollection is that it took me a long time to even muster up the nerve to open my eyes, and then even longer sitting in the living room with all the lights turned back on before I was able to try going back to bed. Ironically, I think of It as one of the weaker King novels I’ve read, but it definitely holds the honor of delivering the greatest scare to me. 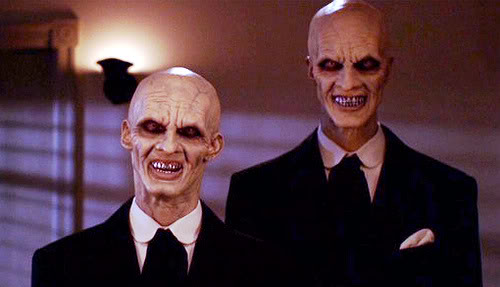 I didn’t really watch Joss Whedon’s television series Buffy the Vampire Slayer for the scary bits. I was far more enamored with Whedon’s wily sense of humor and admiring of his ability to represent the emotional pitfalls of adolescence through analogous horror tropes and travails. The monsters, usually betraying the show’s modest budget more than generating real chills, were a necessary, compromised component of the show. The major exception is the silent, grinning, levitating, dapper hatchet faces known as the Gentlemen. Appearing in the season four standout episode “Hush,” the Gentlemen, like a lot of Buffy demons, were a device, a means to help Whedon to get to a desired storytelling conceit, in this instance an eradication of the dialogue upon which his reputation rested. There was a key difference with these demons, though: they were damn scary.