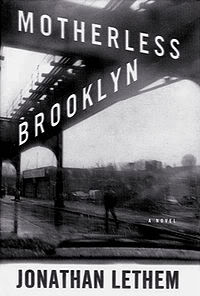 I was voraciously seeking out new fiction in the late nineteen-nineties, no doubt partially inspired by the fact that it was realistically the first time in my life I had enough disposable income to regularly offer business to local bookstores without worrying about which pantry items might need to be forgone for the month to accommodate my reading habit. I looked to as many sources as I could find to get the lowdown on intriguing new works, even this crazy new outlet for information–a veritable superhighway of information, if you will–that showed up on the computer screen after a series of piercing tones delivered over the phone line. I recollect, for example, reading an online article that made me think, ‘I think I should see out this book with the strange title of Motherless Brooklyn.’ To further emphasize how long ago this took place, I’m pretty sure I purchased the hardcover book at the local Border’s.

Motherless Brooklyn was hardly Lethem’s first novel, but he acknowledged that getting into the head of his Tourette syndrome afflicted protagonist, private detective Lionel Essrog, opened up his writing like never before. It loosened him up, make his engage with language in a freer was that added an new intensity to his prose. I didn’t have a point of comparison, but I could sense the energy in the writing. Lethem grounds the book in the comfortable trappings of genre, but finds ways to scratch at something deeper, more existential, using Essrog’s condition to probe the elusive nature of the human mind. It is thoughtful and punchy at the same time. As with many of the writers who I return to over and over again, I was entirely hooked and devoted by the midpoint of my first exposure.

For me, one of the most fascinating aspects of Lethem is the way he routinely grapples with his formative influences in public, as if his writing career is a prolonged dialogue with his audience, not that far removed from late night, half-buzzed dorm room conversations about which “Rowdy” Roddy Piper movie is the coolest (while Lethem’s established choice in that debate is a fine one, I’m afraid there’s a better option that he’s neglecting). Some of my favorite writing by Lethem is collected in The Disappointment Artist, a grateful consideration of the likes of John Cassavetes, Star Wars and, best of all, Jack Kirby. While his non-fiction is rife with this sort of thing, it’s also infused his fiction, notably in the thickly epic The Fortress of Solitude, a story of kids growing up in New York City, largely set in the nineteen-seventies and eighties. Lethem piles on the pop culture references, which help distinctively lock the story into a time and place, but mostly provide a glimpse into the echoing comic books, movies and music that fill the author’s brain. The whole reason I have Donny Hathaway and Dennis Coffey songs in my iTunes is because of the loving references in Lethem’s book.

There’s an intellectual rambunctiousness to Lethem’s writing that I especially appreciate. His mind seems restless when he writes, as if he’s trying out his ideas on the fly and openly offering them up for not approval, but open-hearted sharing. He’s including the reader on his own journey, which can make his books fairly unwieldy (Fortress of Solitude, in particular, in occasionally dizzying in all it’s trying to do) but also indicates a thrilling artistic generosity. Some writers can be above it all, detached from their readers. Lethem often seems grandly motivated to get as close to those readers as he possibly can.

25 thoughts on “My Writers: Jonathan Lethem”