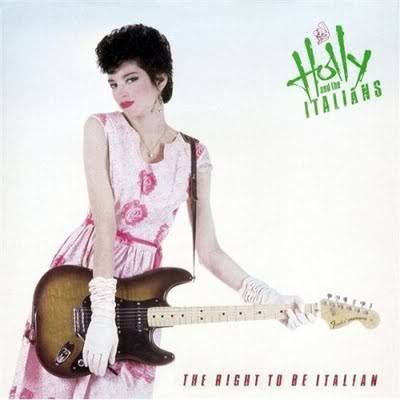 6. Holly and the Italians, The Right to Be Italian

Trouser Press wrote: “More polished than the Go-Go’s, but just as breezy and tuneful. (Subscribers: Play flexi-disc for details.)”

The album The Right to Be Italian opens with lead singer Holly Beth Vincent offering up a modified Shakespeare quote: “Some people achieve greatness, others have it thrust upon them, and then there are those that are born Italian.” She chuckles and a quick drum beat kicks in for a few seconds before a sharp guitar starts buzzing out of a nice, comfortable riff. “I Wanna Go Home” is the first track on the debut album from Holly and the Italians and it wastes no time in establishing who this band is going to be and what they’re going to sound like. It’s old fashioned rock ‘n’ roll, the sort of thing Phil Spector would have dropped a wall of sound upon. It’s retro, tough and unabashedly fun. I’m not sure if it’s more polished that the debut for the Go-Go’s which came out the same year, but it’s certainly sleeker and more powerful, the revving motorcycle to their humming convertible.

I mean, metaphors invoking toughness simply have to be used when discussing the band that created the wickedly great rock song “Tell That Girl to Shut Up.” Though the later cover version by Transvision Vamp is arguably more famous (if only because it’s the one more likely to get dragged out for eighties flashback club nights or radio shows, even though it wasn’t much of hit upon its original release), it belonged to Holly and the Italians, even serving as the band’s debut single on the Oval Records label in 1980. That single combined with good buzz they were getting for opening for bands such as Blondie in the U.K. to get them a deal with Virgin Records, which ushered them to the full-length debut.

The album tapped into the snarling forthrightness of the time, owing something to the likes of the Runaways and their old friend on the club bill, Blondie. “Baby Gets it All” was the sort of youth-titled shrug of rebellion that Joan Jett could have dashed off between drags of a cigarette and “Miles Away” practically emanated romanticized heartbreak in its thudding chords. Vincent sang these songs with unabashed conviction but also enough off an edge that she didn’t come across as some sort of wimpy victim. She was effectively getting her own sort of revenge by sharing these songs, by reaching out to others who waited in parks alone for the jerkface dreamboat who would never show and gaining strength through the melodic commiseration. It’s the girl group model of days gone by, but with an extra blast of cranked up guitars that was reminiscent of the sounds the Ramones created when they rifled through their old 45s looking for song ideas. (Vincent’s approach made her enough of an honorary Ramones that she recorded a very familiar duet with Joey Ramone in 1982.)

The band may have had a tough sound, but that didn’t guarantee resiliency was a characteristic of the group itself. By the following year, the band broke up and Vincent released a solo album that borrowed her former band’s name for a title (in part, it seems, to honor contractual obligations with Virgin Records). Vincent also briefly spent time in the Waitresses and took further swings at the music biz with other solo endeavors and bands that didn’t quite take, such as the horribly named Vowel Movement, the outfit Johnette Napolitano started after the initial end of Concrete Blonde.

Previously
Introduction
10. The Dictators, Fuck ‘Em if They Can’t Take a Joke
8. (tie) The Undertones, Positive Touch
8. The dB’s, Stands for Decibels
7. The Pretenders, II