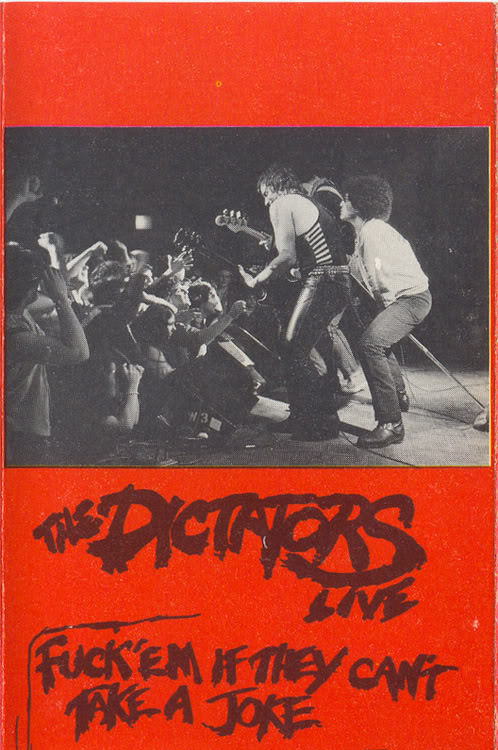 Trouser Press wrote: “Our first cassette-only selection. Rock will never die as long as bands like this are around to give it a swift kick in the pants.”

Thirty years later, rock hasn’t died, but it does sometimes seem like it’s lying in a hospital bed hacking its lungs out. As a side note, I was listening to the latest efforts by Bon Iver and then Fleet Foxes in an an effort to give a fresh pass on some 2011 release in anticipation of making my own Top 10 albums list for Spectrum Culture. In both instances, I gave up before the tracks had fully cycled through; not because they were bad–both are fine, intricate efforts–but because the tender refinement sort of wore me out. I switched over to the Dictators album and suddenly the raw, fervent simplicity of it all made me wonder what I was even doing with this newer sweet, moody nonsense. There’s just nothing like a bunch of half-mad ruffians–especially if they have names like Ross the Boss and Top Ten–beating the hell out of their instruments as if they’re pretty certain no one’s going let them play another show anyway.

The Dictators first album, Go Girl Crazy!, came out in the spring of 1975, a full year before the Ramones’ properly acclaimed self-titled debut became the defining statement of the New York City punk scene. The Dictators were loud, raucous, blazing through their songs with abandon. They were also a cult success, at best. They spent the next few years and couple of albums going through different line-ups and they tried to find a way to elbow their way in to the halls of rock royalty. Despite having a major label pushing their product and burning gloriously in a scene that the rock press was anxious to document, it was to no avail and the band was defunct by the late nineteen-seventies. Of course, it’s often not as simple as that, and reunion gigs started to happen (or, as some band members would put it, regular old show continued after some natural breaks).

The liner notes explain, “All material on this cassette was recorded live through a sixteen track mixing console on to a two track dorkorder on February 11, 1981.” From the very beginning, when lead singer Handsome Dick Manitoba screams into the microphone–“Are you ready? Are we ready?”–the album is a blazing demonstration of grand rock ‘n’ roll showmanship. The Dictators pound through several of their exemplary originals–“Weekend” is a standout, as is “Two-Tub Man” which features especially fiery guitar work by Ross Friedman (billed here as Ross Funicello)–and deploy a couple choice covers. Of the latter, their careening wrecking ball version of the Stooges’ seminal “Search and Destroy” may be fitting, but it’s the spirited reinvention of the Velvet Underground’s “What Goes On” that stands out the most. Importantly, it all sounds fun. Manitoba may be one of the few frontman in the history of rock who can say, “We all gotta sing along, which is my favorite part of the song,” and have it sound completely genuine.

There weren’t really any additional albums from the Dictators, depending on one’s view of the releases that started coming out at the beginning of the 21st century or, for that matter, the offerings from the band Manitoba’s Wild Kingdom, which shares enough DNA to count for some fans. Still, the fact that they’re still kicking around, regardless of what form they’re in, means they at least outlasted cassettes.