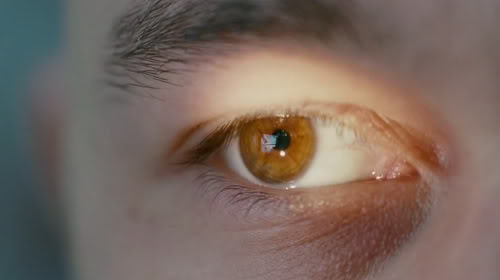 This much is certain about the small battalion of scruffy creators that Judd Apatow has cultivated: they’re really good and following in the footsteps of their benevolent mentor and nurturing along cohorts themselves. Seth Rogen was one of the cast members from the Apatow-produced TV series Freaks and Geeks who was plucked up and encouraged to find his voice through writing. In turn, Rogen was instrumental in getting Will Reiser, his cohort from the production offices of Da Ali G Show, to pen a screenplay based on his personal experience as a twenty-something diagnosed with a rare, highly aggressive form of cancer. The result is something very much like any number of works that have Apatow’s phantom fingerprints on them somewhere: amiable, amusing and disappointingly shapeless. 50/50 is a movie with a lot of interesting elements, a few of which are truly inspired and insightful. It’s also a movie that spends a lot of time getting in the way of itself.

Joseph Gordon-Levitt plays the Reiser stand-in Adam, an earnest segment producer at a Seattle public radio station. When visiting the doctor about some minor but persistent back pain, he is informed that he has contracted schwannoma neurofibrosarcoma on his spine (there’s a nice, honest detail a couple scenes later when Adam can’t quite remember the name of his ailment). The rest of the film depicts his various struggles with the treatments he endures, the emotional rollercoaster of it all and the way he draws strength from a few key relationships, including one with a coworker and old high school friend, played by Rogen.

Much has been made of the film’s daring in treating cancer comedically, but the bulk of the film is actually fairly dramatic, wringing only the wryest humor out of the challenges faced by Adam. Rogen’s performance is the only one that smacks of pure comedy, and it stands as one of the film’s most glaring flaws. Rogen is performing the same basic schtick he’s routinely leaned on since 2007’s Knocked Up made him one of the most unlikely leading men in Hollywood. He’s a slovenly, uncouth, horny, jovial stoner, a character that doesn’t fully jibe with the film. Ostensibly, he’s providing Adam with a sort of respite from his miseries, but that doesn’t come across. He’s just comic relief, often as intrusive as the wacky neighbor in a sitcom.

Luckily, that problem is lessened by the fact the primary focus landing squarely on Adam and the characteristically marvelous, empathetic performance by Gordon-Levitt in the role. Without keying overly on familiar emotional patterns of dealing with such personal issues, Gordon-Levitt expertly covers the entirety of the character’s journey. He’s especially good at showing the ways that bravado falls away to reveal the more combustible reactions underneath. It’s the versatility and facility of the performance that helps the film be at its strongest in the scenes that center on Adam’s interactions with his youthful, inexperienced therapist. In many respects, this is the most familiar, even cliched part of the film, an impression not helped by the hoariness of a potential romantic relationship developing between the two. But it’s also the portion of the film that gives Gordon-Levitt a chance to act against someone who’s fully on his level in developing an intricate, deeply-felt character as Anna Kenrick invests the role with detail that takes it past the potential caricature it could have easily become.

Jonathan Levin directs 50/50 in a solid, unmemorable style. Every choice he makes is suitable enough, but he doesn’t really find a method to add a spark or any particular panache to the material. There’s no voice to it, nor any of the insightful balance it needs. Sometimes the movie barrels forward and sometimes it lingers in its melancholy, without any particular storytelling melody to the choices he makes. The title of the film refers to the discouraging odds given to the main character upon receiving his diagnosis, but it’s also an adequate measure of the overall quality of the film. How much it works and how much of it doesn’t? The answer’s clear as the title.