Bend your brain back to the scintillating, swingin’ sixties when Marvel was moving major muscles to make their monthly mags manifestly mandatory. The proof was in the panels, but there was a scintilla of selling that had to happen, usually in a cocksure column of the “Bullpen Bulletins” page known as the Mighty Marvel Checklist. There may have been absolute awesomeness abounding, but there was also a teeny tendency to tilt toward tantalizingly trumped up touting. For example, the boisterous ballyhoo backing Daredevil #39: “As if the blistering battle between ol’ Hornhead and the terrible Trapster isn’t enough, we can safely promise you the most unexpected surprise of the year when you reach the end of this landmark issue!” With a tease like that, the only challenge is resisting the urge to tear straight through to the final page.

Staving that siren song, the sags starts strongly. The tale told by writer Stan (The Man) Lee and Gene (The Dean) Colan begins as Daredevil dangles outside an upper window of the Baxter Building, happy home of the Fantastic Four. The terrible Trapster has used his pesky paste to adhere the Invisible Girl to the low-lying linoleum. What’s worse, he’s ruthlessly rigged a bomb to blast if anyone enters. That doesn’t do in Daredevil, who used his enhanced hearing to detect the device and haul it from hiding to hurl it into the open air where it harms no one, save perhaps a passing pigeon. He frees his fellow fighter of fearsome foes from the awful adhesive just in time for two of her teammates to rush into the room. 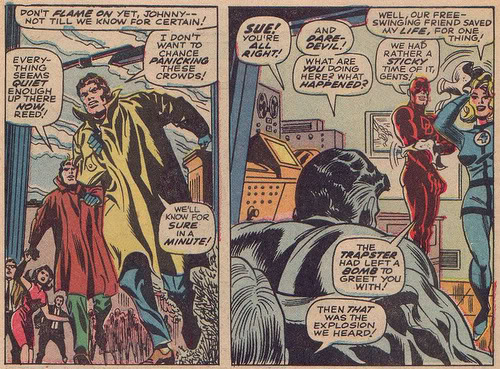 It seems a suspicious sight, a finely fit pair toweling off together, but it raises no eyebrows among this trusting tribe. The Trapster is still shooting across the skies, embarking on evil endeavors, so, as duty demands, Daredevil departs. The dauntless do-gooder tracks the Trapster, craftily crippling his crazy craft so that a controlled crash is the only outcome. 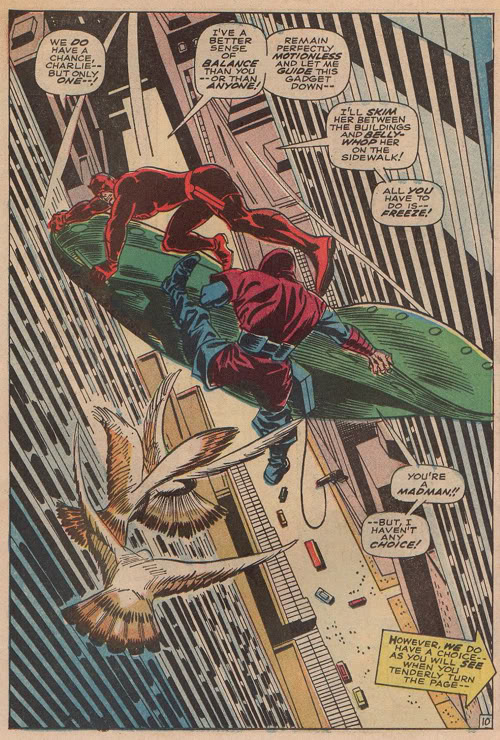 Dig that cool Colan splash page! Surely, the issue has already provided thrills aplenty, but the battle hasn’t exactly been bruising. But, brother, you better believe the brash brutality is about to begin! 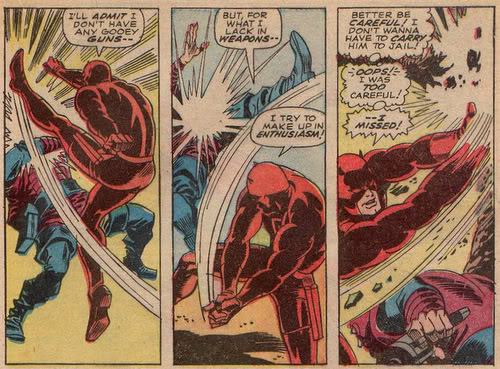 When a hero’s main concern is saving himself the hardship of hauling his opponent to the O.R., that’s undoubtedly a bruising battle. The ferocious fisticuffs continue until the costumed combatants somersault down some seriously solid subway steps. 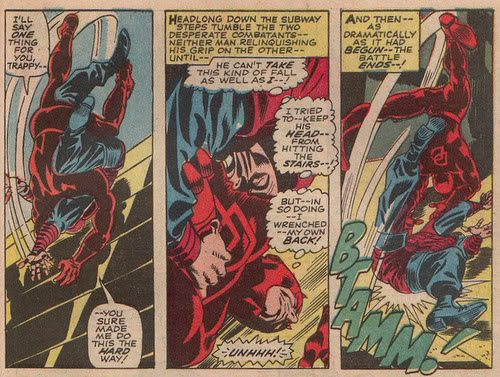 For readers ruminating on the provability of the previous promise of “bruising,” be sure that a terrible tumble such as that is likely to leave a mark. It also knocks the Trapster unconscious, meaning he’s easily apprehended by the arriving authorities. Daredevil is also out, but he rolls under a nearby platform as is therefore left behind. When he comes to, it’s the end of the landmark issue, so the “most unexpected surprise of the year” must be waiting. Well, point your peepers at the powerful panel: 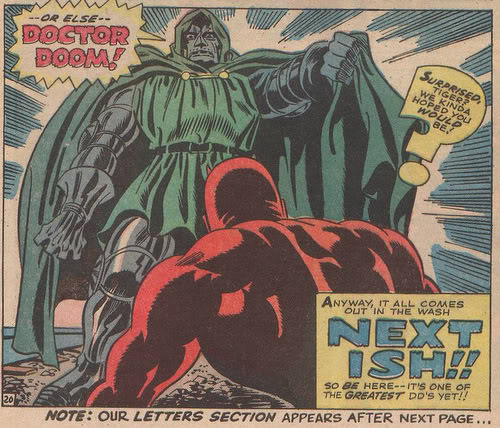 It’s none other than the ruthless ruler of Latveria, the dastardly Dr. Doom. Surprised, tiger? Well, it’s hard to fathom while the vicious, virulent villain is scrounging around the sordid subway, so sure. Unexpected? Check. A tricky twist that comes out of nowhere? That’s a check, too. Of course, factual foreshadowing was never part of the promise.