Spellbound an’ swallowed ’til the tolling ended, tolling for the aching ones whose wounds cannot be nursed 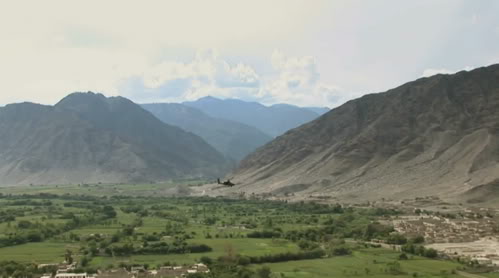 It takes no time at all for Restrepo to establish itself as a completely different breed of war documentary. The film follows an American platoon that’s been dispatched to Afghanistan’s Korengal Valley, an area so fraught with danger that it’s been convincingly cited as the deadliest place on Earth. The soldiers are told to expect that they will be under fire each and every day, and the fighting in the film arrives with an immediacy that is stunning. Even more stunning is just how close to the action the camera manages to get. It is right there, pressed in among the soldiers, surveying the excitement and dismay of war firsthand, the toes of the cameraman poised upon the front line.

The stated mission of directors Tim Hetherington and Sebastian Junger is capturing the experience of the men taking up arms and fighting the war, with no external commentary provided by family members, politicians or military experts. They are not weighing the merits or folly of this particular war. The goal is simple and profound: “make viewers feel as if they have just been through a 90-minute deployment.” Just as they pass no judgment on the war, the directors extend their evenhanded approach to the men. They are not heroes or monsters, brutish thinkers or misplaced philosophers. They are merely people that have chosen to do a tough, terrible job. Their lives is Afghanistan are often marked by harrowing firefights, but also by boredom, rambunctiousness and camaraderie. They must come to terms with the challenge of making only incremental progress, and the frustration that it can all be wiped out unpredictably in a few bad moments.

Because of Restrepo, I’ve seen war in way I never have before. I haven’t experienced it. I don’t know the grind or the desperation or the pride of standing with a rifle in a distant dusty land. I can’t understand the fear and clamor that come from being under fire, nor the adrenaline rush that accompanies it, the sense of victory from simply surviving. I don’t know what it is to carry a heavy pack in the pounding sun, or to contact loved ones through faulty means in anticipation of embarking on a mission that may very well mean I’ll never have the opportunity to talk to them again. But at least I can now say that I’ve seen it. Not all of it, not months of it, but enough of it to know a little better what our soldiers go through, to be able to think of the men on the ground when the news reports on the war, especially when they are considering it strictly in terms of its homeland political ramifications, disinterested in the detail that citizens have volunteered to put their lives on the line. In that regard, Hetherington and Junger have done something more than craft a fierce, fearless piece of observational journalism. They’ve made a film that provides a public service, fulfills an unstated duty. One of the roles of film is to carry the audience someplace they’d otherwise never reach. Restrepo surely does that.

One thought on “Spellbound an’ swallowed ’til the tolling ended, tolling for the aching ones whose wounds cannot be nursed”