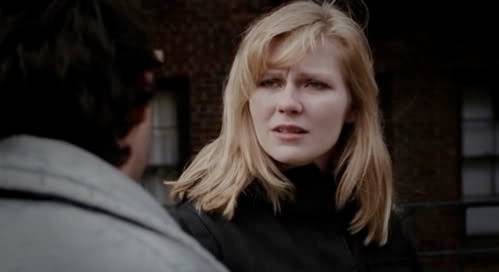 #4 — Kirsten Dunst as Mary in Eternal Sunshine of the Spotless Mind (Michel Gondry, 2004)

Michel Gondry’s heady collaboration with screenwriter Charlie Kaufman doesn’t lack for praise. It was a critical favorite from the moment it was released, got both men and their fellow credited story creator Pierre Bismuth called to the Kodak Theatre stage to collect a Best Original Screenplay Oscar, and emerged during the frenzy of retrospective evaluation at the close of 2009 as the consensus pick for the best film of the first ten years starting with the number two. Given that, I’ve long been struck by the relative dearth of attention paid to the various performances within the film. Kate Winslet occasionally gets singled out for her portrayal of the arty, alternative object of the main character’s affection, often with enamored leaps about what she represents, a strangely fitting fate given that one of the character’s most poignant observations is “Too many guys think I’m a concept, or I complete them, or I’m gonna make them alive. But I’m just a fucked-up girl who’s lookin’ for my own peace of mind; don’t assign me yours.” Lead Jim Carrey also receives the occasional cursory nod, usually with the faint praise damnation of comparing his subdued work here against the actor’s rubber-faced norm.

This partially stems from film writers’ general focus on the merits of the main plot involving the members of a recently ended romantic relationship who seek out the services of an odd little company that selectively takes an eraser to the mind, wiping away the memories that their clients would rather be without. What follows is a trippy journey through the human mind as a portion of it forcibly fades away. In other words, the film proceeds with some of Charlie Kaufman’s signature finger painting with reality. All that bending of perception and deconstruction of identity itself undeniably grabs the attention, but there are other threads of the story that keep things grounded. The portions that take place outside of the mind of the main character add emotional weight to a film that would otherwise threaten to become overwhelmed by its own fanciful conceits. And that side of the film is anchored by the performance of Kirsten Dunst.

Dunst plays Mary, an employee of Lacuna, Inc., the business that provides the memory-altering procedure. When she first shows up in the film, she’s moving around the company’s nondescript office, simply and efficiently doing her job, perhaps offering a little nod of reassurance when someone asks if the unbelievable process actually works. She’s the model of normalcy, and Dunst plays her as such. There’s no wink to the audience, no cues of the greater importance her character may have. In a trick rarer than it sounds, Dunst makes it fully believable that she spends her days ushering people from the waiting room into consults, sticking address labels on envelopes, and answering the phone only to offer the same information over and over again. From the very beginning, Dunst convincingly draws Mary as a person who simply does her job everyday, drudgery and all, instead of a movie character who’s being positioned for more important matters in a reel or two.

Later in the film, she joins a couple of techs from the company at the apartment of Carrey’s character. They are monitoring the machinery that selectively scrubs his memory as he lies still and sedate in a sleep deep enough to be called coma-like. It’s there that Mary’s dominoes start to fall, and Dunst is given an opportunity to open up the character. She’s both flirtatious and casually cold, depending on which person she’s interacting with, making the shifts natural instead of jarring swerves. As the makeshift party progresses with liquor and pot, Mary opens up even more, gushing with swooning awe about their shared boss, the doctor who developed the procedure. Once things start to go wrong with the client, that doctor has to be called in, and the character shifts again. Dunst moves from pure impulsiveness and the sort of thick-tongued pontification that a night of controlled substance debauchery can produce to a more vulnerable mode. She has a crush on her boss, and this somewhat private encounter is a chance to reach out to him. In these critical moments of the film, Dunst is vulnerable and eager, trying to impress him with the quotations that she’s memorized, as if she’s been trying to fill in gaps within her own mind.

This is when the final, coldest twist arrives as Mary discovers that she’s been subjected to the process herself in order to sweep away thoughts of an affair she’s already had with the doctor, the very nature of the procedure leaving her with no awareness of what’s been done to her. This is where the film moves from the playfulness of its concept into dealing realistically with the repercussions of it, and Dunst’s acting is central to the effectiveness of this turning point. She plays the hard shock of it, the immediate sense of loss so overwhelming that it changes her whole physicality. She moves more slowly, the cruel uncertainty that now envelops her creating a numbness that is visible. The performance has already been built on contrasts, but this last manifestation of her self, her being, her personality is the toughest to watch. The stripping of memory no longer seems like the mere invention of filmmakers. It is something that has happened to a person who seemed as plain, relatable and recognizable as can be when she was introduced, and the impact of what’s happened, what’s been done to her, is painfully real. The exuberant dancing of a few scenes earlier has been replaced with a beaten shuffle. It is the honesty within the film’s wild creativity, realized in the eyes of Kirsten Dunst as she looks out a world that she’s no longer sure she can trust.