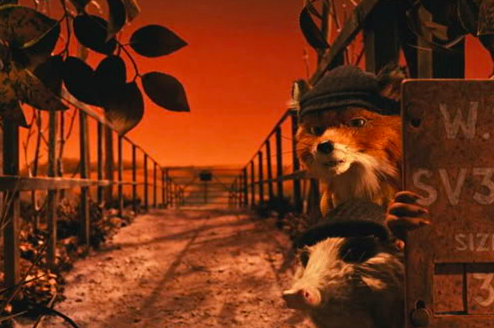 Around the time that The Darjeeling Limited was released, a good friend of mine, who knows a thing or two about movies himself, asked me if I was going to go see the “new dollhouse” from Wes Anderson. That struck me as a perfect and succinct way to describe Anderson’s filmmaking approach. I like the majority of Anderson’s films, some of them a great deal (and one of them with a level of affection probably matched only by the proudest members of Anderson’s immediate family), but I also recognize that he brings a precision to his image construction that can have a certain embalming quality, as if he wants to drain every bit of human uncertainty out of his work. That characteristic in his style has increased exponentially with each film, so it makes a certain sense that he finally has arrived at the dollhouses that my pal unwittingly predicted. And he’s filled them with little puppets that he can control down to their tiniest movements. It’s also no surprise that he clearly feels right at home.

The Fantastic Mr. Fox is based on a Roald Dahl novel, but, by all accounts, Anderson and his screenplay collaborator, Noah Baumbach, have embellished it generously. In the film, Mr. Fox is a skilled thief of chickens and other farmland property. As many must do, he has to settle down, abandoning his youthful indiscretions in favor of stolid security in a mundane job, and a nice little home with his wife and child. And as many eventually discover, he can’t quite resist the allure of his dangerous former life, and recruits some willing friends to engage in just one more job that naturally evolves into just one more series of jobs. His criminal endeavors raise the ire of the farmers he’s targeted, leading to a necessary retreat underground as a full out war escalates.

Anderson tells his story with zest and wit, and, despite a public skirmish that cast doubt upon his authorship, it is definitely, distinctively his, the very first moments of the opening credits, as clear as a signature. Anderson’s musical taste, slightly off-kilter pacing, and deadpan tone are all fully present, as is a tendency to emphasize the underlying sadness in his character’s lives. The action is spirited, but really lingers is the conflict between cousins or other aspects of mild familial dismay, and the sense of quiet perseverance that often accompanies it. To be fair, there may be a tad too much of that, and the film could have benefited from a few more instances of offhand absurdist humor–the ones that are there are easily the moments that work the best. But as with Spike Jonze’s Where the Wild Things Are from earlier this year, it’s the added depth in a film that could have easily gotten by on surface gloss that makes the effort come close to being, well, fantastic.